As described in Hedgehog Basic Equipment, I chose to use a loose bedding hoping Carefresh and soft hay would give more opportunities for foraging and nesting behaviour. Hides provided with an wooden ‘Up’ Themed Trixie House and modified shoe boxes and exercise through a wheel. I wasn’t enjoying it and felt like maybe something else would work and look better.

I’m really attracted to the behavioural and health improvements noticed by Bente the author of ‘Hedgehogs of Asgard’ when she started to use a bioactive enclosure for her African Pygmy Hedgehog: Bioactive Hedgehog Habitats . I wasn’t attracted to the learning curve… so I decided to meet the idea of a naturalistic environment half way.

I put it into a box.

And then added some worms and meal worm beetles; the worms because Chai seemed unable to eat them and they needed somewhere nice to live and mealworms at various stage of development since she would be most likely to eat them without the excitement of her feeding tongs. 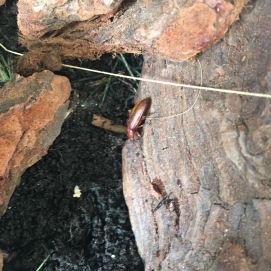 Worms one week after moving in 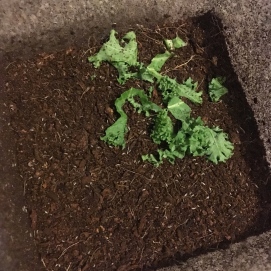 And later, because I noticed a bit of mould growth in damp areas I added a colony of springtails to help keep things in the forage box nice and tidy.

The goal of the experiment is to explore what kind of set up will be best if I am ever to move the entire vivarium to a naturalistic (or even semi-bio active). We’ve been feeding Chai her bugs in the forage box and watching how she behaves in it and we’ve noticed a few things.

A video of one of the first times we let Chai hunt bugs unaided with feeding tongs directing her to the bugs we wanted her to eat. The forage box was in her vivarium at this time.

Next Steps: I want to give the springtails a bit of time to work out if they’re happy in the vivarium (and I’m happy with how to keep them happy!) before I buy the substrate ingredients I’ll need to replace the current carefresh. I’m glad I tried this experiment, she’d have been pretty miserable if I’d gone for a more soil-based vivarium with just patches of sand.

This is a text widget, which allows you to add text or HTML to your sidebar. You can use them to display text, links, images, HTML, or a combination of these. Edit them in the Widget section of the Customizer.